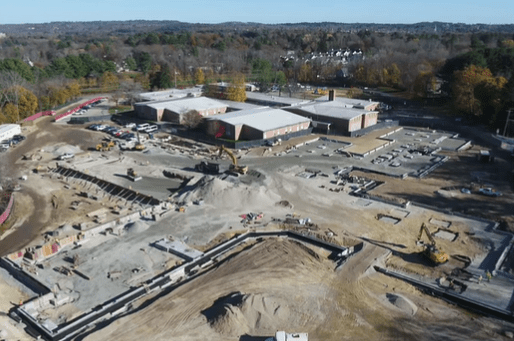 Town Manager Andrew Flanagan told the West Elementary School Committee Wednesday he planned to authorize $1.4 million from the town’s $10 million free cash to offset the amount in new borrowing special town meeting will be asked to authorize Dec. 1 to cover a $16.4 million budget overrun at the construction project.

“This is good news,” Flanagan said. “It reduces the overall tax impact.”

If special town meeting does not approve the two articles on the Dec. 1 warrant, the project will likely be delayed, and the town could face additional delay charges. The new school is scheduled to open at the start of the 2024-25 school year.

How Much Will It Cost?

As of Sunday, the budget overrun was $16.4 million as a result of an ongoing descoping process. The descoping process includes reviewing contracts and omitting, reassigning and renegotiating work. The West Elementary School Building Committee disclosed a $19 million budget overrun on the $151.6 million project in September. That number had fallen to $17.5 million by last month’s quad-board meeting to discuss the project.

Special town meeting will be asked to approve new borrowing up to the $16.4 million figure and to transfer $463,731 left over from the $1.2 million town meeting approved in 2018 to fund the West Elementary School Feasibility Study to fill the budget shortfall. The shortfall is attributed to higher inflation and global supply chain issues.

If approved at the current $16.4 million estimate, the borrowing would add approximately $69 to the average Andover taxpayer’s annual bill, based on an average assessed single-family value of $759,453. Those taxpayers are already paying an estimated $471 per year over 30 years for the original project cost and have a total annual local property tax bill of $11,088.

The actual impact to taxpayers could range from $65 to $83 for the average taxpayer, based on different interest rates when the town completes the borrowing.

No Room To Make Additional Cuts

Over the summer, the building committee closed a $5.5 million budget deficit by scaling back certain elements of the project and tapping into the project’s $9.5 million construction contingency fund. The project was originally budgeted at $151.6 million project, including $119.2 million in actual construction costs.

Since then, the West El building committee considered but chose not to recommend several changes that would have brought the budget deficit down an additional $5.9 million, or $25.50 per year for the average Andover taxpayer. Those changes would have included:

“We decided not to recommend these because they would either significantly cut down the scope of the project, have an impact on education or simply be things we’d have to fund some other way through a different funding mechanism,” Committee Chair Joel Blumstein said at the building committee’s virtual meeting Wednesday.

Last month, the Andover select board voted to forgo a special election 13 days after the Dec. 1 special town meeting for final approval. That application has been approved by the state Department of Revenue., Flanagan said Thursday.

Read more about the West El project and budget overruns.

The town has been holding information sessions leading up to special town meeting. Blumstein said Wednesday the sessions that have been held thus far have “not been particularly well attended.”