Flanagan Faulted In Labor Board Ruling Against Chelmsford 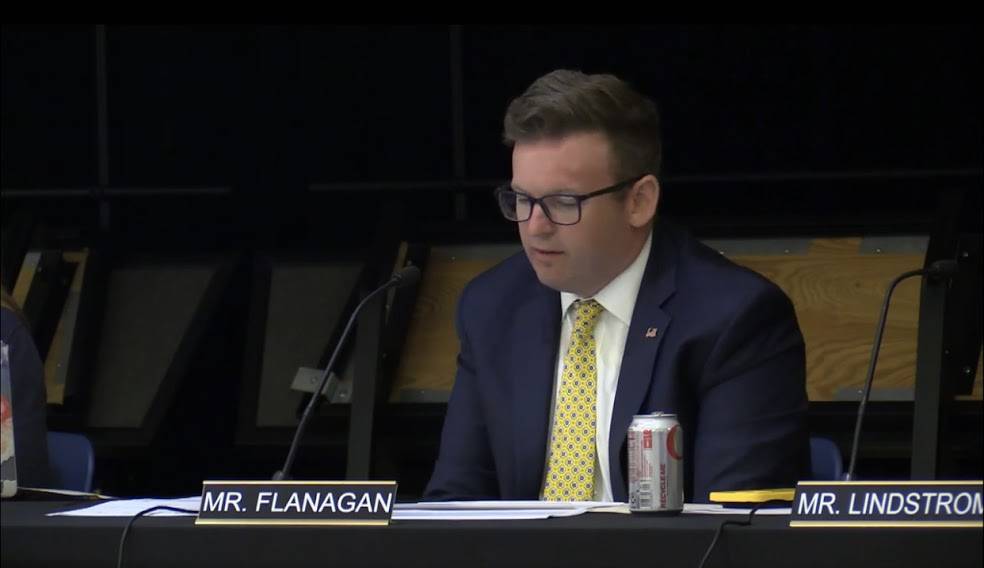 Andover Town Manager Andrew Flanagan played a central role in a labor dispute where the town of Chelmsford “acted in bad faith” during contract arbitration with the union representing its police officers and “mislead” Chelmsford town meeting before it voted to reject the 2019 arbitration decision, according to a ruling issued Tuesday by the Massachusetts Department of Labor Relations.

Flanagan was a volunteer and lone dissenter on the three-member panel chosen by DLR to arbitrate the contract. The ruling says Flanagan had regular contact with Chelmsford town counsel, who was not identified by name in the ruling, throughout the proceedings in 2018 and early 2019, sharing draft decisions that were marked “confidential” and ultimately signing a dissenting opinion that had been written by the town counsel.

The ruling concludes Chelmsford “acted in bad faith when Town Counsel engaged in ex-parte communications with Flanagan.” It also forces Chelmsford to resubmit the $108,531 arbitration award to town meeting for reconsideration.

While the New England Police Benevolent Association Local 20 filed the complaint against the town and the ruling does not directly accuse Flanagan of wrongdoing, his role in the matter is outlined in minute detail culled from testimony, text messages and emails reviewed by DLR hearing officer Sara Skibski.

In an email Wednesday, Flanagan noted his dissent did not change the panel’s ultimate decision in favor of the union and his conduct “did not violate any state law.” Portions of Flanagan’s email are included at relevant points in this article. A copy of Flanagan’s entire, unedited email can be found at the bottom of this article.

“My dissenting vote on the JLMC [Joint Labor Management Committee] award did not change the outcome of the award,” Flanagan said. “At no point, did I participate in any plan or take any action to influence Chelmsford’s Town Meeting.”

The dissent signed by Flanagan ultimately led the Chelmsford Finance Committee to recommend the Feb. 4, 2019 special town meeting not approve the contract that had been approved by the arbitration panel over Flanagan’s dissent. After finance committee members shared copies of the dissent, Chelmsford Special Town Meeting rejected the pact 89-26, with 5 abstentions, according to Skibski’s ruling.

“Well that went well I suppose,” Flanagan said in a text message to Chelmsford town counsel after the special town meeting on Feb. 4, 2019.

“I am not unhappy with the result,” Chelmsford town counsel responded. “Apparently, there was significant discussion about your dissent.”

What Was Flanagan Doing In The Middle Of A Chelmsford Labor Dispute?

Flanagan was serving on a three-member Joint Labor Management Committee, which are formed by the state to help municipalities negotiate labor agreements with their workers. Flanagan was part of a pool of people approved by the Massachusetts Governor who have labor or municipal management experience to serve on JLMCs. Each JLMC is made up of an attorney serving as the neutral chair, along with a labor and management representative chosen at random from the JLMC pool.

While JLMC members are chosen for their expertise in municipal management or organized labor, they are not supposed to advocate for either side. Instead, all JLMC committee members make “every effort to encourage the parties to engage in good faith negotiations to reach settlement through negotiations or mediation.”

The ruling notes Flanagan “did not receive any formal training regarding his service on the JLMC” prior to serving on the Chelmsford panel. In his email Wednesday, Flanagan said he was appointed to the panel “to represent the interests of town management.

“In doing so, I worked closely with Chelmsford’s management representatives during the JLMC process to understand the data, dimensions, and perspectives of management in this collective bargaining dispute,” Flanagan said. “As the hearing officer states in her decision, the panel representatives were free to speak with their respective sides.”

In testimony at the DLR hearing, Flanagan testified JLMC Chair Beth Ann Wolfson suggested he and Alan Andrews, the labor committee member on the panel, speak to the parties to see if there was anything that could make the award more agreeable to both sides. Flanagan also testified “that he left the meeting with the understanding that nothing that was discussed between the panel was off-limits in terms of future communications with the parties,” according to the ruling.

While Wolfson testified she expected the deliberations between panel members to remain confidential, “she did not verbally inform the panel of her expectations,” Tuesday’s DLR ruling said,

“The issue at hand requires a close examination of Flanagan’s conduct and his participation in the alleged ex-parte communications,” Skibski wrote. “Therefore, a finding that the Town violated the Law would also reflect on Flanagan’s conduct as JLMC Committee Member. In this respect, I find Wolfson’s testimony more persuasive.”

In December 2018, following the hearing, Chelmsford town counsel sent Flanagan a draft of its post-arbitration brief asking for his feedback. The following month, Flanagan forwarded the draft of the arbitration award written by Wolfson.

“You have got to be kidding me! I’m in meetings this morning, but will call this afternoon,” Chelmsford town counsel said in an email to Flanagan after reading the draft arbitration award.

Flanagan told Wolfson he planned to dissent on Feb. 1. “If all fails, would you consider writing (I can draft) a minority position,” Chelmsford town counsel said in a text to Flanagan on Feb. 2.

“I think you should go ahead and draft my dissenting opinion,” Flanagan responded. “She [Wolfson] and I are at a deadlock on this.”

On Feb. 3, Chelmsford town counsel sent Flanagan a draft dissenting opinion. On Feb. 4, Wolfson issued the ruling in favor of the union, “including Flanagan’s dissent, which Town Counsel had written for Flanagan,” according to the ruling.

“Both Town Counsel and Flanagan understood that Wolfson would incorporate his words verbatim into the Award,” Skibski wrote in her ruling. “The substance of the dissenting opinion includes criticisms and observations of the majority Award as well as the Town’s proposal for a wage increase that it would find acceptable. Wolfson and Andrews were not aware that Town Counsel had drafted the dissenting opinion on Flanagan’s behalf.”

At Chelmsford Special Town Meeting that night, Chelmsford Finance Committee Members passed out copies of the dissent and read it aloud. They did not, however, include copies of the majority opinions, and Town Counsel never told town meeting representatives who had drafted the dissent.

Following the special town meeting, the union began requesting documents related to the arbitration and contract. When those documents “raised concerns” and the town refused to release some additional documents, the union filed it complaint with DLR, leading to Tuesday’s ruling.

Thanks for giving me an opportunity to comment.  Please see below and let me know if you have any questions.

The hearing officer’s decision in the DLR case represents a labor dispute between the Town of Chelmsford and one of their unions.  My role and conduct as a management representative was consistent with common JLMC practice and did not violate any state law or JLMC rule.   As the management representative on the JLMC panel, I was appointed by the JLMC to represent the interests of town management.  In doing so, I worked closely with Chelmsford’s management representatives during the JLMC process to understand the data, dimensions, and perspectives of management in this collective bargaining dispute. As the hearing officer states in her decision, the panel representatives were free to speak with their respective sides.  My dissenting vote on the JLMC award did not change the outcome of the award.  At no point, did I participate in any plan or take any action to influence Chelmsford’s Town Meeting.  In fact, once the panel’s arbitration award was issued, my work on the matter ended.  As the hearing officer’s decision states, the JLMC award in its final form was in favor of the union.