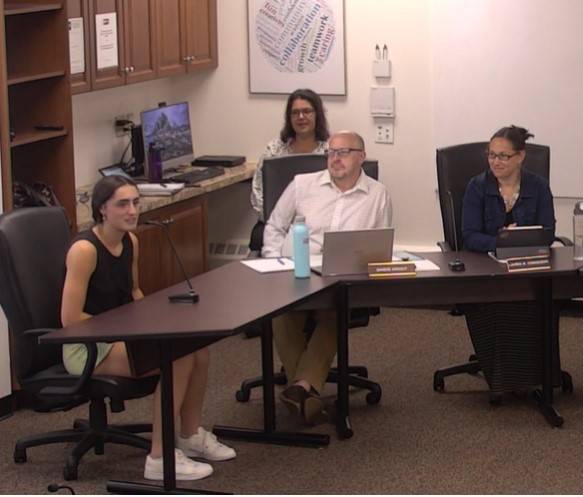 Correction: An earlier version of this article gave the wrong spelling of the last name of Sophia Miele, the new student rep to the school committee. Andover News regrets the error.

Andover Public Schools were closed Friday for the Labor Day holiday recess, but district bus drivers were driving their routes to “iron out” some of the problems on Wednesday and Thursday, Keith Taverna, assistant superintendent for finance, told the Andover School Committee at its meeting Thursday.

Taverna said the district was seeing “some improvements” in transportation during the first two school days on Wednesday and Thursday when compared to last year. On the first day of school “we did experience some delays and missteps,” Taverna said. He said on Thursday, all buses arrived at schools on time in the morning, but in the afternoon there was “another round of challenges.”

Taverna said the school’s transportation contractor, Trombley, was still having some staffing issues that plagued the district’s bussing last year. He also apologized for the late notice to families about the district’s decision to not publish bus routes this year.

Andover High School student Sophia Miele was named the student representative to the Andover School Committee for the 2022-23 school year.

“I’m really excited to be working with you and representing Andover High this year,” Miele (left in photo above) said.

Miele replaces Justin Jin, a senior, who thanked the committee and his teachers for their support during his year as student liaison. Jin stepped down after being elected president of AHS student government last spring.

Preliminary enrollment numbers showed 5,610 students enrolled in Andover Public Schools this year, up from 5,565 on the first day of school last year. The number of students being homeschooled in Andover was 25 to start this year, down from 61 at the start of last year.

School districts across the state saw steep enrollment declines during the coronavirus pandemic. The school committee will received finalized enrollment numbers for the 2022-23 school year next month.