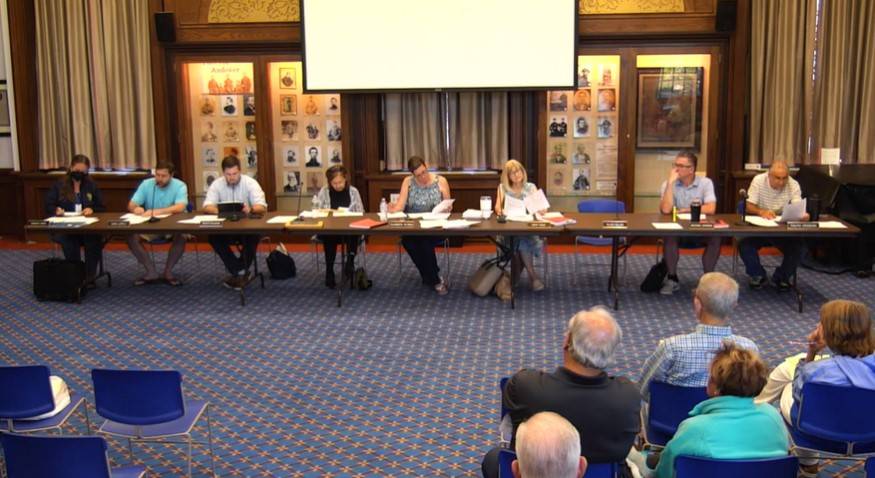 The Andover Zoning Board of Appeals continued its public hearing on a proposed, drug treatment facility at 140 Haverhill Street Thursday after spending more than 90 minutes hearing complaints from Haverhill Street residents who live near the site.

The hearing will resume at the ZBA’s Oct. 6 meeting, a day after a Massachusetts Land Court hearing on an appeal of an earlier ZBA approval of an earlier version of the project. ZBA members said they wanted to hold off on closing the hearing Thursday to get input from Andover town counsel.

ZBA Chair Elizabeth Oltman said town counsel Tom Urbelis had COVID and was not able to attend Thursday’s hearing. “I think it will make it easier for us, the remaining board members, if we have Tom here,” Oltman said.

Regardless of how the board votes on the project, the losing side will likely appeal its decision. “This decision is going to be appealed either way,” said Mark Bobrowski, an attorney for Medico 140 LLC. You can read project documents on the ZBA Website.

ZBA member Ellen Keller recused herself from the hearing.

Thursday’s hearing at Memorial Hall Library was a continuation from last month, when ZBA members said they wanted time to consult with counsel before issuing a decision on Medico 140 LLC’s plan. Medico 140 received planning board approval in July for a special permit for an inpatient and outpatient drug treatment facility at 140 Haverhill Street in Andover, which it purchased for $660,000 in March 2021.

The company, which opened a similar facility in Wilmington last year after a four-year legal challenge by neighbors and Wilmington officials, has operated its outpatient program in an existing building on the Andover property since purchasing the site. Under the special permit approved by the planning board, Medico would build a new, 9,180-square-foot facility to house the program, known as Topsail, in the new development. The building for the new inpatient program would be approximately 39,000-square-feet and have beds for 64 patients.

“Make a call to the chief of police in Wilmington,” Bobrowski said. “It’s the same facility, and he has not had a single complaint.”

Dennis Richards, a Haverhill Street resident, said he was concerned the facility could be used as a walk-in methadone clinic in the future. Oltman said the board had been specifically told it would not be used as a methadone clinic and Medico would need to go before the planning board and ZBA board if that changed in the future. Bobrowski said while methadone would be kept onsite in a safe and may be used in an individual patient’s treatment, Medico had no intention of using the facility as a walk-in methadone clinic open to the public.

Last September the ZBA approved three variances for the project, including the Andover zoning rules calling for a 300-foot setback, a five-foot setback for parking spaces and a prohibition on overnight care at a medical clinic. Neighbors of the project have filed an appeal of that decision with the Massachusetts Land Court. That case, which argues neighbors were not given appropriate notice before the September ZBA hearing, is still pending. A status conference is scheduled for Oct. 6 in Land Court.

At last month’s two-hour hearing, Medico asked the ZBA to reissue two of those variances and two new variances: one allowing them to proceed with 154 parking spots instead of the 200 to 250 required under local zoning laws and one allowing cars from into a right of way, as several rights of way make up the aisles in the proposed parking lot. The developers said they no longer needed the variance for the five-foot parking variance.

“When you vote…I want you to think about your house in Andover, and how you would feel if this” project was being opened near it, Richard Renzi, who lives across the street from the site, said Thursday. “Not one person has come up here to speak in favor of it.”

Zoning Board of Appeals