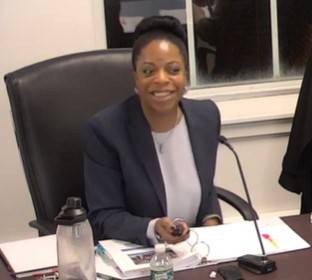 Since taking over as superintendent of Andover Public Schools at the start of the 2021-22 school year, Dr. Magda Parvey has had to lead the effort to bring the district out of the coronavirus pandemic, a period that will have long-term impacts on students for years.

Parvey worked to get Special Town Meeting approval to pay for budget overruns at the West Elementary construction projects and led the ongoing efforts to replace the aging Andover High School. She wrestled with a bus driver shortage that has caused delays and headaches for parents and kids, and she started tackling an overhaul of the district’s curriculum, which, among other things, will increase coaching to supplement classroom learning.

In other words, it’s been anything but a normal start to her tenure.

The Andover School Committee recognized those and other efforts Thursday with a unanimous vote to extend her current, three-year contract for six years, beginning July 1. It’s a huge vote of confidence, given that it’s the maximum contract length allowed for public school superintendents under state law.

“As a community, we have accomplished a lot in my first year and a half in the district,” Parvey said in a statement. “I look forward to providing consistent practices, increased accountability, sustainability and stability for our students and staff in partnership with the School Committee. Securing long-term leadership for the district reflects the Committee’s commitment to our school community and families.”

School committee members said it was a small price, as it keeps Andover out of the competitive hiring market for school superintendents. There are currently 35 active searches for superintendents out of 275 districts in Massachusetts.

“Her leadership in the coming years will ensure stability for the district and advance the necessary work in curriculum development, communications, and consistency across the district that Dr. Parvey has begun with administrators, faculty and staff during her first 18 months as the leader of APS,” School Committee Chair Susan McCready said in a news release. Dr. Parvey has assembled a talented team to support our educators, and most importantly, our students and families.”