Replacing Andover High ‘Will Not Be An Easy Process’ 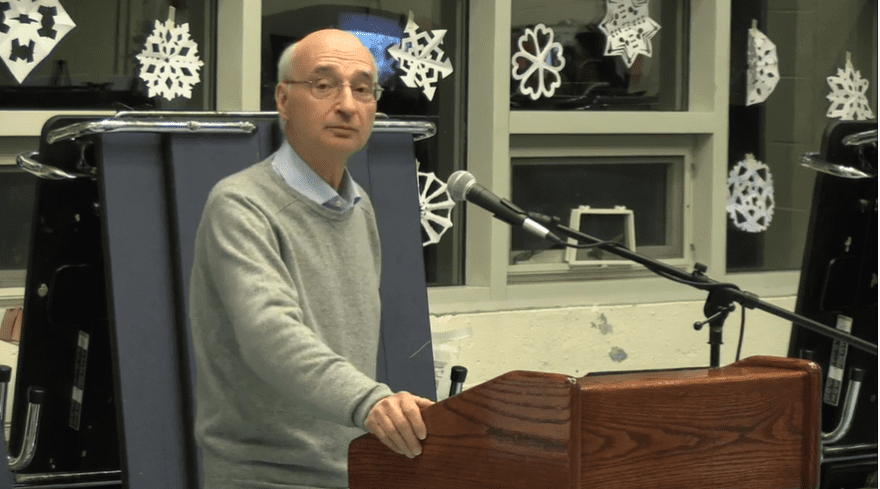 The committee has opted to move forward with the project after repeated denials for state assistance from the Massachusetts School Building Authority. Andover cannot apply again for MSBA assistance until the ongoing $168 million West Elementary School construction project is closed out. The committee estimates waiting for state funding would delay opening until at least 2032.

“This is the first non-MSBA project Andover has done, and we know it’s not going to be an easy process,” Building Committee Chair Mark Johnson said at Thursday’s forum (video). “The goal of the building committee is to present to Town Meeting a thought out project – one that we vetted, one that we spent time getting input from the community and an eventual course that we hope will be acceptable for members of the town.”

“The decisions we’re going to be making over the next month are to narrow down the options…then get some high-level pricing on it,” Johnson (main photo) said. “These will all be preliminary, ballpark numbers.”

Current high school construction projects in Massachusetts have costs ranging from $505 to $862 per square foot:

Based on the committee’s preliminary estimate of 252,228 square feet in the new school and the average in the table above, a new high school could cost in the neighborhood of $162 million. That rough estimate does not include borrowing and design costs.

The building committee has repeatedly signaled it prefers building a new school. And renovating the existing school would not necessarily be a cheaper option on a cost per square foot basis, although the overall cost could be significantly cheaper.

According to MSBA, eight current high school renovation projects have costs ranging from $456 to $725 per square foot, or $597 on average. The preliminary renovation proposal presented at the committee’s Nov. 22 meeting calls for as much as 140,000 square feet in additions to the existing school, which is 157,118 square feet. Based on the MSBA average, that would bring the back-of-envelope renovation estimate to $83.5 million.

A renovation would also present construction scheduling challenges to allow the existing school to remain open during construction. A renovation could take as long as five years, or approximately two years longer than new construction, according to designers.

The school’s current enrollment is 1,709 students, and a 2017 demographic study suggested the town should aim to build a high school for 1,900 students. Under current guidelines from the Massachusetts School Building Authority, the existing school only has enough space for 1,400 students.

The current high school was designed for 1,200 students in grades 10-12 and opened along with Dunn Gym in 1968. The Collins Center was added in 1983. The last significant renovation came in 1995, when the science wing and field house were added, and the school was expanded to include ninth graders. AHS is just one of three high schools in Essex County that has not been replaced or had major renovations in the past 25 years.

Problems at the current school include outdated technology, poor insulation and mechanical ventilation, and small classrooms with poor lighting. Portions of the building do not meet current building codes or comply with the Americans with Disabilities Act.

A replacement or renovation could increase the size of the school by as much as 60.5 percent and allow it to accommodate up to 1,900 students, according to preliminary schematics.

Once approved, construction of a new school would take approximately two to three years.

Are The Collins Center’s Days Numbered?